Counting 12's in the Streets

I want to find 1 or 2 streets that will not come out on the next spin, I need away to know which 2
streets they will be, with the highest probability possible.

I will then use those 2 streets as the numbers, I miss out in my 4 Streets system.

What we are looking for:

We are counting only Streets that have not come out for 12 spins or more, I call them (12's), we want to know.

Every new spin we add 1 to the a mount of times each street has NOT come out.

When any number comes out, the street that number is in is reset to 0.
When any street gets to 12 spins and it has not been out, it is now called "12's".

The question is as 12's leave and new one's come, how many minimum & maximum and the average, 12's+ do we have at each new spin.

In the above image:
This is how many 12's came out at the same time. The left column numbers are the a mount of times from 0 to 10 that a number can come out. "Times out" means, how many times 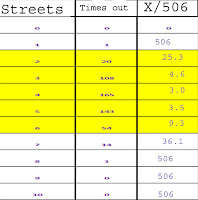 In the above image:
These numbers are just from the number 2 Street. Every time the 2 Street came out, these are the Street numbers, that came out, on the next spin.


The left column is the street numbers.
The right column is the frequency of all the streets that came out, only after the number 2 street came out first.
We want to know if all streets come out after every other street, including the same street coming out after it has already been out.

This shows what we are looking for. Any Street that has not come out, for 12 of more spins.

In the pink columns, go to the bottom before the "x" and this number means, that's how many spins that street has not been out for. Look across, from left to right, there are 12 numbers and 1 "X".

Each pink number is how many different 12's there were in that result.

Between 2 and 6, 12's coming out in every result is common. You will get a few doubles of the same street  numbers (3,3). Every Street will come out with every other street.

Just need to work out of the 3 or more 12's in the results, what would be a very good way to pick the one to bet against. The 12's lose at some point, what I have noticed is that you do get long runs of no losses.
This make sense, because if 4 streets are 12's, that leaves 8 streets, that can come out, before the 4, 12's streets do. We can use these streets to play the 4 Streets system, where 4 street's times 3 numbers = 12 numbers to miss out.
I am going to count how many times each number comes out in 14 lots of real numbers played at a real Casino: 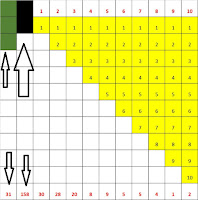 
These numbers are how many times the 12's came out, there were 507 results.

The Black box means, that was when a 12's came out, if you look at the bottom of that column you see the number 158, this means 158 times, the winning number was one of the 12's. 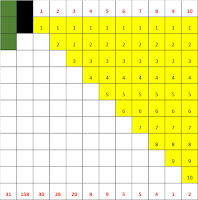 
The yellow boxes are winning numbers that were not one of the 12's, the number in the graph.

How will this help us: 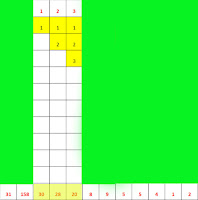 These yellow boxes mean, the 12's streets, did NOT come out, this is how many of the other streets came out in a row.

How will this help us:
This means you are going to have one of the 12's come out at some point when you are betting
against them, so you need to factor this into the way you bet, if we look at 14 spins only, this gives every street 1 chance to come out and 2 extra spins, how often we will see the a street called "12's" come out in the last 2 results.

In the image above:
Here are 9 results, each box contains only the streets that did not come out in the first 12 spins, some boxes have 3 results and some have 6, I picked these results, because they all had one of these streets come out in the last 2 spins, these means if you had bet against that street, you would have loss.

Here are 9 results, that did not lose on the last 2 spins. On top of the boxes there are red box with an "x" in it, and a black box or nothing at all, this tells me at what spin I got these results from.
What we see is there will be losing bets in the last 2 spins and winning bets, so we have to add another reason to delete streets and see if this increases our pick only winning streets.

Adding the Cold Numbers to the streets:
The plan is to check with the last 37 spins, find the cold numbers, and see if we can make a streets with these numbers.